What is Speedify for Teams?

With Speedify for Teams, you get lightning-fast channel bonding and rock-solid redundancy for all of the people and devices in your organization. Other benefits include a centralized management interface (the Teams Dashboard) and individual customization options. Additionally, Teams users also have access to API keys and the opportunity to purchase Dedicated Speed Servers. For organizations that need to stream video from devices in the field, it's a huge step up in quality and reliability. There isn't a minimum number of users required for the Team's subscription, you can start with just one member and add or subtract the number of users later on.

Any sort of remote user will benefit from Speedify, whether they are working from home, while on the road or at a satellite office with DSL and 3G internet. Users will especially benefit if they use any sort of real-time streaming apps like VoIP, video conferencing, remote desktop or live streaming.

Users of Speedify for Teams will get the same great Speedify experience and will benefit from our innovative channel bonding technology wherever they are around the world—whether they are using Android, iOS, Windows or macOS.

Speedify for Teams offers many configuration options to support your scenarios. Whether you are trying to bring better mobile connectivity to mobile devices and workers, stream professional video more reliably, or bond slow DSL and/or LTE connections for better internet in a satellite office, Speedify for Teams is your solution. 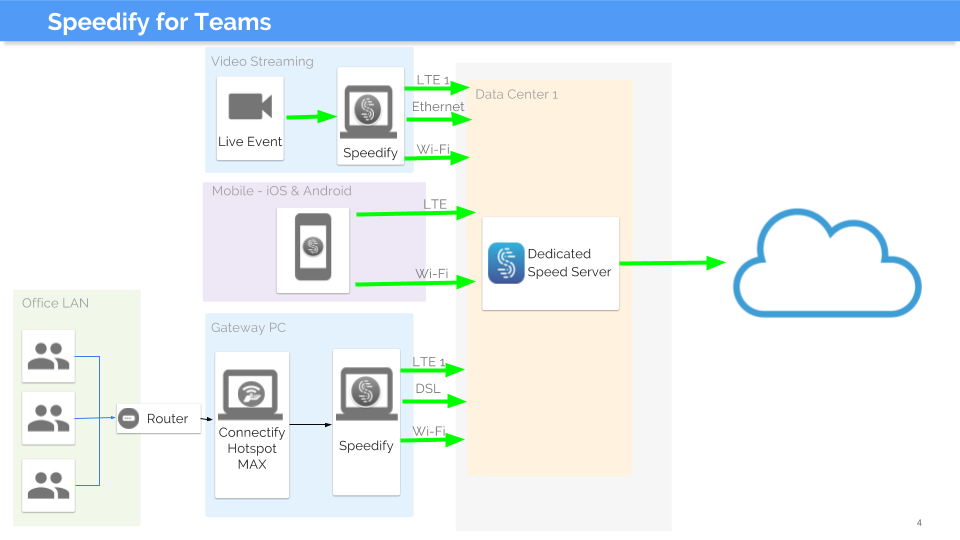 Other options to consider include:

Click here to purchase a Speedify for Teams plan.