What is Speedify for Linux (Ubuntu and Raspberry Pi OS)?

What is Speedify for Linux?

Speedify is a bonding VPN which both encrypts all of your internet traffic for security and makes it fast with the magic of Channel Bonding!

Our unique channel bonding technology enables you to securely use multiple internet connections at the same time: Wi-Fi, 3G, 4G, and wired connections. This means you get increased bandwidth, lower latency, and better reliability. How? Once you’re connected to our global network of VPN Speed Servers, Speedify intelligently distributes online traffic between all available internet connections, so that you’ll never have to worry about buffering videos, slow streaming, or interrupted downloads again.

What is Speedify for Linux good for?

Speedify now brings to Ubuntu and Raspberry Pi OS all the same features and advantages that Speedify brings other operating systems:

Just by being on Linux Speedify gains some new tricks:

How do I get started?

How do you control Speedify on Linux?

There are three different ways to configure and control Speedify on Ubuntu and Raspberry Pi OS: 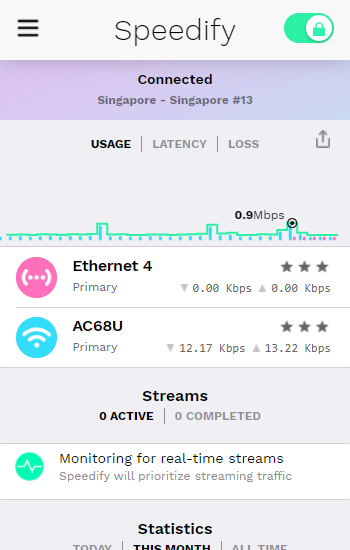